In the summer of 2004… I was in my mid-twenties and back living with my parents in the suburbs of Chicago.  I had just completed touring the nation after three years with the excellent rock and roll band from New Orleans called Cowboy Mouth.  I was looking for my next adventure while also trying to figure out what my future would look.  When you are 25 and living with your parents… they say you need a career.  I had already ventured far off the path… whether it was doing movie promotions in Hollywood to hopping on a tour bus and criss crossing the lower 48 states creating and selling t-shirts for one of my favorite bands.  I first tried to create an entertainment sponsorship company called No Reverse aimed at marketing music and movies to the college market.  No Reverse was named after my belief that you should always be looking forward… pushing ahead to the next goal.  It was also based on the car I drove in college… a 1986 Volvo that by the time it died at the end of my year in LA had 312,500 miles on it… the same car that for six months in college at the University of Alabama… did not go in reverse.  It did not really bother me though and never really mattered… as long as I was looking forward.

Back to the summer of '04…  After about six months of trying to launch the business and quickly learning I knew nothing… I was back at step one.  In my senior year of college I had taken a photography class and always done it as a hobby and found it to be a passion as I explored the world around me.  While touring I had set up a website to share my adventures and even offered a store to buy some prints… never selling more than $100 - $200 in a month… but bringing in beer money so no complaints.  I still don't know to this day what clicked… or why… but in August of that year…not only did my friend Danny Beck at the great Chicago bar Toons buy a print of mine and instantly framed it and hung it on the wall at his bar… but I also sold 8 prints in one week…the most I ever had in that short of a time and it sparked an idea… Why not try to do photography full time!  The #1 seller at the time and the picture that I credit with kickstarting it all…. was a color version of a baseball on the field at beautiful Wrigley Field with the green ivy and iconic scoreboard behind it.  I had taken the image a year before while on a private tour of the ballpark and now the Friendly Confines were pushing me forward once again.

Here is an edited version of that original image and still one of my most popular shots: 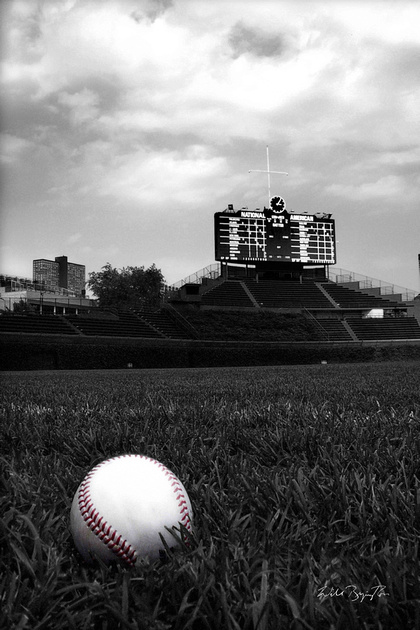 ​Fast forward to today… Ten years later and I am still doing photography full time.  I am incredibly thankful for my family and friends who have supported, enabled, encouraged and pushed me forward with this life.  I am launching this new site today the latest version of my website… containing what I consider some of my best images.  Take a look around.  I will be adding MANY more shots as I know there are multiple images I have forgotten… and have yet to take.  Say hello… let me know what shots you love… or what you would like to see more of.  I have also tried and failed at blogging over the past decade… and hope to change that.  I hope to post more stories, behind the scenes, Q&A, and anything else here on the blog.  Finally… as I keep trucking forward… Let me know if we can work together.  No gig is too small or too large… and no distance is too far.  I am willing to travel the world… or to a backyard in Lakeview.  I can do video as well as photography…  Let's work together!

​With all that… I say thank you again… and welcome… Enjoy your look around.

Michael Smith(non-registered)
I still have the three photos (including the baseball above) you gave me as a wedding gift... One of the most enduring gifts I received. Thanks and glad things are doing well!
Mel(non-registered)
Great job on the new site Will... Sometimes I forget I knew you through Cowboy Mouth before the cruises.. Lol